When Is the RIGHT TIME To Buy?

Mortgage interest rates are at an all-time low, and housing prices are rising. This point in time may be a once-in-a-lifetime opportunity to own the home of your dreams.

When the Great Recession was in full bloom, housing prices fell year over year, until the price of the average home was far less than its replacement cost. Now the economy has turned around and housing prices with it.

The vast majority of experts say that housing prices have bottomed out. Statistics prove them right. In 2012, for the first time in several years, the value of housing rose – an average 4.5 percent nationwide.

What does that mean for a homeowner? Let’s suppose on January 1, 2012, you bought a house for $300,000. On an average basis, in the past year the value of that house went to $313,500. In other words, your equity automatically went up that much. That’s a nice return on investment.

NO BARGAINS IN RENTALS

Homeowners who lost their homes during the recession were forced to rent, resulting in a shortage of rental properties. While home prices plummeted, rents went up well over 20 percent.

Last September Forbes magazine, a leading business journal, stated that in today’s economic climate buying a home is 45 percent less expensive than renting. That translates to thousands of dollars in savings per year for those fortunate enough to own their homes.

Another advantage of buying versus renting is the predictability. If you have a 30-year mortgage, you know what your monthly payments will be for the next 30 years. Renting is different; a landlord can raise your rent at the end of each lease term.

WALL STREET ON THE PROWL

The number of foreclosures, at record highs a few years ago, is down. One of the major reasons is that the “big money” – large real estate investment trusts (REITs) – are buying up foreclosed single-family homes in record numbers and renting them out. This is a new phenomenon that has been building in the past two years or so. REITs soon may be the largest residential landlords in the country.

Furthermore, take a look at the stock market. Which one stock in the 500-stock Standard and Poor’s Index went up by the greatest percentage last year? Apple? No. Google? No. The winner was Pulte Homes, whose value tripled in 2012. Those Wall Street folks usually know where the money is going. . .

For several months, David Crowe, chief economist for the National Association of Home Builders, has predicted a severe housing shortage that will continue for a decade. Why? Because U.S. builders have not been building enough homes to keep up with population growth. Crowe contends that the pivotal point in housing demand and value is now.

Many potential homebuyers, looking back over the past four years, continue to fear the convulsions that hit the housing market. They pooh-pooh such old investment saws as “But straw hats in the winter.” They overlook the advice of experts like Warren Buffet whose counsel, when it comes to real estate, is more relevant than ever: “The time to get interested is when no one else is,” says Buffet. “You can’t buy what is popular and do well.”

If you believe interest rates and home prices will stay static, there’s no reason to rush. But, if you think – as we do – that interest rates soon will rise along with prices, you may agree that 2013 is the year to buy – or the year you will wish you had bought!

WHY NOT NEWPORT COVE?

Newport Cove offers buyers not just a high-quality home, but also a vacation lifestyle. Fish on your lunch hour. Have after-hours cocktails on the pier. Take an evening boat ride any day of the week. Live the dream! 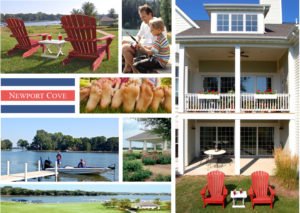